Summer is here, which means warm days, rain, christmas time, hearing the call of the Woodlands Kingfisher, and the snakes are getting active, John Gear wrote a post about these interesting creatures

People are afraid of snakes and many believe the best sort of snake is a dead snake. However this belief is based on fear, graphic stories of early explorers on horseback being chased by black mambas, pythons constricting children to death and cobras spitting in their victims eyes from 10 metres.

Each of these is a massive exaggeration; true, mambas are aggressive if cornered with no way to escape, pythons do kill their prey by constriction and cobras can spit accurately over a short distance. However the reality is that all snakes like to avoid confrontation and would rather slither away from danger. So if you do come upon a snake, stay calm, back away slowly to give the snake a change to move away freely (this is probably an area of 5-10m) and then you can observe the beauty of these amazing creatures. Most snakes on Zandspruit are not venomous to humans and those that are (Mamba, Puffadder and Cobra being the most important) will not attack you without being provoked. Yes, the Boomslang is also venomous but because it is “backfanged” it does not easily bite. It is a beautiful snake, with the male being bright green, with a large round eye. It is an  arboreal snake species (active in trees) and can sometimes be found in trees around your house. Its presence is often revealed by the incessant agitated chattering of birds (usually more than one species) that gather around the snake (as close as 1m) sometimes ”bombing” it and trying to chase it away.

Birds are not only active in uniting against snakes but also other predators such as mongooses so always be alert to bird parties chattering angrily; they may lead you to a special nature sighting. But back to snakes.

Finding a snake in your house

You may be startled by a snake in your house. Snakes are always seeking out new safe places to hide and to hibernate. If you live in the bush long enough you WILL find a snake in your house. If you are not an expert DO NOT try to kill it or to catch it or to chase it out. Likelihood is that all that will happen is that it will disappear into a place where it is difficult to catch and you will live in constant fear that it is still behind that cupboard. Call Mike or better still call the Kinyonga Reptile Park and they will send someone to catch it and release it in the bush. Keep an eye on it from a safe distance, leave outside doors and windows open and with luck it might leave of its own accord. 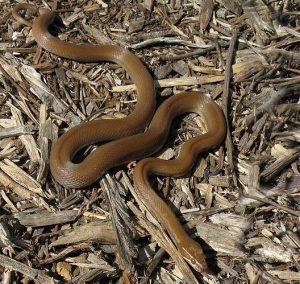 Be alert in the evening

The only other good advice about snakes is that some are slow relying on camouflage to avoid protection and also like to bask on warm stones and ground in the early evening. When walking outside watch your step and if it is getting dark carry a flashlight/torch. Most human snake bites are caused by people handling snakes and in some cases when people have trodden on a snake basking in the sun or on warm ground at the end of a hot day.

Finally do yourself a big favour and go with your family to the Kinyonga Reptile Park. After your visit you will have a much better understanding of snakes, of their value in rodent control and how easy it is to share your bush garden with these extraordinary reptiles. 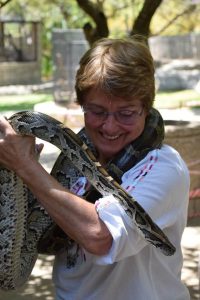 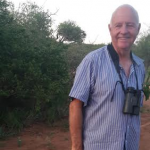 John Gear is one of the home owners of Zandspruit Bush & Aero Estate. He is a nature enthusiast and we are very excited that he contributes to our blog with his views and ideas. John welcomes corrections, challenges and contributions from each of you, so please do leave a comment below.